The CPB marked the centennial of the end of World War I by performing in an international music event on Nov. 11, 2018, from 1-2 p.m. on King Street in Charleston. They played traditional pipe music including the tune, "When the Battle Is Over," (which coined with the United Kingdom's observance and performance of this specific tune) to honor all those who served. Proceeds from the sale of merchandise and donations on th e day were given to the S.C. Chapter of the USO. They raised several hundred dollars to support veterans and active duty military personnel. Special thanks were given to retired USMC Col. Charles O. Skipper, M.D., who was the master of ceremonies for the day.

The band will be re-forming a Grade V feeder unit, giving us three competitive units in the 2018 season. We look forward to the debut performances of both new groups at the Northeast Florida Highland Games in February!

Grade 5 brought home a first place prize from the Smoky Mountain Scottish Festival & Games held May 20-21 at Maryville College in Maryville, Tennessee. It is their first win in over seven years. Grade 3 also had a successful run with its first outing at that level with straight firsts out of one.

ARMSTRONG is SR. Piper of the Day at JAX

Peter Armstrong won Senior Piper of the Day at the Northeast Florida Scottish Games and Festival held in Jacksonville, Fla,, on Feb. 25. The Grade 5 band placed 5th out of 6, but the drummers took 2nd in their category.
​

Charleston Pipe Band was featured in the City Paper on Feb. 1, 2017. Pipe Major J.D. Ingraham was interviewed about what a pipe band is, competition levels, and a little about the band's history. Click here to read more.

Our Grade IV band has been upgraded to Grade III and we are pleased to announce that the band will be lead next year by a former Senior Pipe Major, Jim Dillahey. He rejoins the band as an instructor after a hiatus that included trips to the World Championships and building our other hometown pipe band - The Citadel Regimental Band and Pipes Association (CRBPA) - to new highs. We look forward to his help alongside Instructor Josh Collins and Senior Pipe Major JD Ingraham.

CONTEST WINS
CPB competed for the last time this 2016 season in the Scotland County Highland Games. Both band units competed for the title of Southern Champions in their respective grades. Grade 5 played better than they have all year, and in the face of extremely strong competition took home a strong 4th place. Grade 4 had some setbacks both on and off the field, but thanks to indomitable spirit and more than a little help from our instructor, we were given straight 1st place rankings, making us the EUSPBA Grade 4 Southern Champions, and the leading EUSPBA band in the grade as the season comes to a close. On Oct. 22, we will mark the official end of the season, when we will be named Champions Supreme for the 2016 season.

A COMMITMENT TO MUSIC
The band began service to the community by offering weekly lessons for interested bagpipers starting Sept. 7, 2016.  This will be a rotating program with new classes beginning every 4 months.  If you know someone interested in learning to play the pipes or drums, they can begin with the next group the first week of January.  Contact us for details and requirements.

SUPPORT FROM THE COMMUNITY
We continue the drive to refresh our equipment and uniforms, and a pressing need at the moment is Drum Major Equipment.  Your tax deductible donation this fall and winter season will go towards the Mace and Sash for our drum majors to carry at festivals and in parades in the coming years.  As always, you are also welcome to mark your donations for specific items, such as pipe and drum education, musical instruments, and uniforms.  The support of our friends in the community is what keeps us going.

The next weekend was our hometown festival, The Charleston Scottish Games.  We had a hugely successful day in both bands and solo competitions.  Drum Sergeant John Guerry took home the overall drummer of the day award, and Drum Corporal Matt Fann earned the Mike Murphy Memorial Drumming award for the second year in a row.  The Grade 4 band also earned straight 1st place marks, making it the first time since 2005 that our senior competition unit won our home games.

We wrap up our competition season just up the road at the Scotland County Highland Games, where we will compete for the title of Grade 4 Southern Champions and seek to cement our place as Grade 4 EUSPBA champions supreme.

July wins, and a commitment to Honor and Serve

Grade 5 took 3rd place overall with their Quick March Medley, and Grade 4 took 2nd place in the Medley and 1st place in the March/Strathspey/Reel for a 1st place overall finish. This prepares the band for the fall contests where they will play the March/Strathspey/Reel set in Grade 4 two more times — at the Charleston Scottish Festival on Sept. 17, 2016, and at the Scotland County Festival on Oct. 1, 2016.

On Sept. 11, Charleston Pipe Band will serve the community and honor our country with a free outdoor concert in Charleston. Be on the lookout for more details as the time draws near.

We will also begin service to the community by offering weekly lessons for interested bagpipers starting Sept. 7, 2016.  Contact us for details and requirements.

SUMMER WINS
For the second time this year, Charleston Pipe Band brought home a first place prize in Grade 4 band competition.  On May 28, 2016, after competing in the Greater Greenville Scottish Games held at Furman University, the band won the top competitive prize of the day - The St Andrews Society Quaich.

This is the first win for the band under their new musical leader, Pipe Major JD Ingraham.  Ingraham took over the position last summer.
Additionally, Ingraham and Drum Sergeant John Guerry, took home top honors in solo competition at the festival receiving Piper of the Day and Drummer of the Day for their respective grade levels.

Bagpipe and drum competition is sanctioned by the Eastern United States Pipe Band Association (EUSPBA), and is generally held at 5 grade levels. Bands compete at grades 1-5.  Charleston currently fields bands in grades 4 and 5. The Citadel also fields a student band at some contests in grade 4 and/or 5. 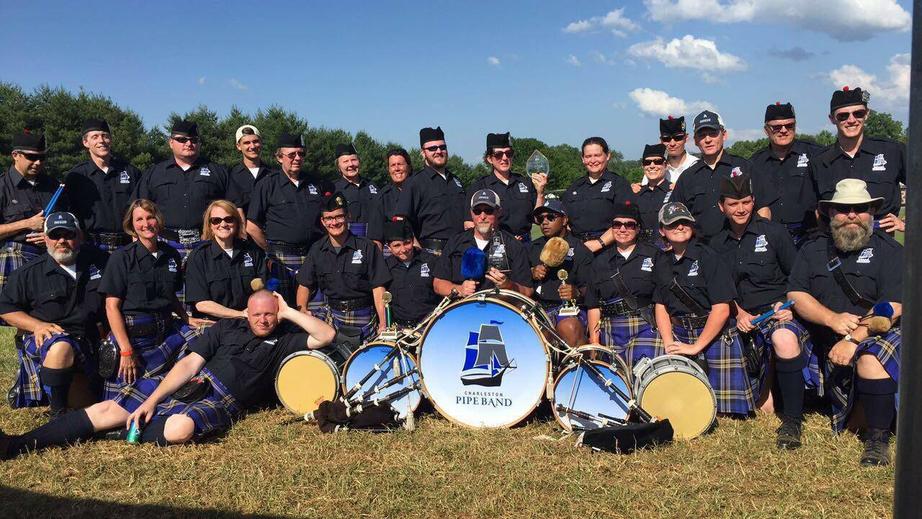