The Charleston Pipe Band continues to grow and develop, providing service to the City of Charleston, the Charleston Police Department, the Public Safety Community of South Carolina, and the public at large through parades, performances, and instruction in the art of Highland piping and drumming.
This volunteer organization has a tradition of service to both the Charleston Police Department and the Lowcountry community. Its membership is composed of primarily of civilian volunteers along with active duty police, fire and safety officers. This award-winning organization is well-known locally, regionally, nationally, and internationally for its musicianship and professionalism.
As a self-funded and self-sustaining organization, all proceeds received by the band via sponsorship, parades, and other performances are allocated toward operating costs such as equipment, uniforms, and competition expenses. The band plays various events predominantly throughout the Southeast. Performances vary from individual pipers, quartets, or full parades. 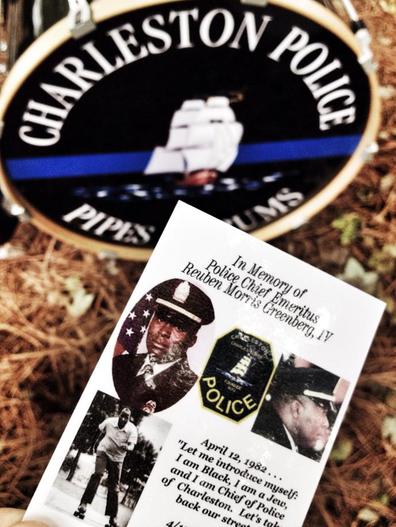 The Charleston Pipe Band has traveled throughout much of the Eastern United States Seaboard and Canada performing at parades, festivals, public events, funerals, and Scottish Highland Games.
Sandy Jones, an internationally known pipe major, was the band's first pipe major. His skills and experience as co-founder of the North American Academy of Piping and Drumming, a pipe major for the U.S. Air Force and pipe band director of The Citadel led the band to many successes — laying the foundation for what would become an excellent corps of pipers and drummers.

The 2004 Eastern United States Pipe Band Association (EUSPBA) competition season marked the debut of the City of Charleston Police tartan, designed by Marjorie Warren specifically for the band. This tartan replaced the MacLean of Duart tartan and was first worn at the Virginia Scottish Games in Alexandria, Va. The police tartan is still worn by the band today, and it is widely recognized for its distinctive beauty.

In 2005, the band achieved its highest level of accomplishment, winning the title of Overall EUSPBA Champions for both Grade III and Grade V. Correspondingly, both Grades III and V were promoted in the 2006 season. In 2016, Grade IV earned the title of Season Champions Supreme. The organization has achieved success at all levels of competition from Grade V to Grade II.​